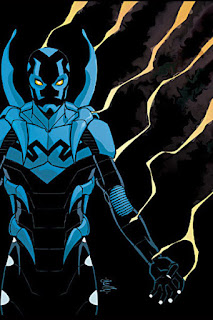 A friend of mine lent me a big stack of 3rd generation Blue Beetle trade-paperbacks to read. The Jaime Reyes incarnation is one of her favourite characters, his predecessor Ted Kord is one of mine. I ignored the latest version of the character for years, was angry of his existence, and never gave him a chance. I loved the 2nd generation Blue Beetle very much, and after his untimely gun-shot to the head demise I really had no interest in reading an outer-space themed re-boot of my favourite member of the Justice League of my youth.

Especially since this version of Blue Beetle was co-created by Keith Giffen, one of my favourite writers (and co-writer of many of my favourite Blue Beetle tales of all time), it's especially amazing that I gave this series a cold shoulder. The story picks up in a very Kyle Rayner / Green Lantern fashion, with a young man being in the wrong place at the wrong time and stumbling into the life of a super-hero. And because Jaime is a high school student with all the everyday problems of youth mixed with super-heroics, there's also a bit of an early Peter Parker / Spidey vibe.

I fell in love with the character and his family, which they wisely intertwined into the history of the character's legacy that came before. He hangs out with the grand-daughter of the original Blue Beetle, looks up to Ted Kord with much hero-worship (one can even spot a WWTKD banner posted on Jaime's wall), and starts up friendships with Ted's former JLA team-mates.

I have learned of and been reminded of a couple of valuable lessons. Do not fear change and give things a chance. Maybe I should give some multi-coloured head-band TMNT comics a shot now too?
Posted by batturtle at 12:19 PM