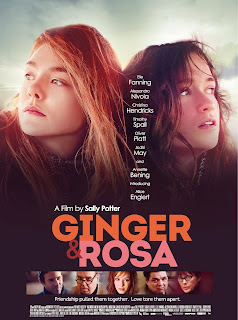 Elle Fanning stole the show away from giant space monsters and lense flares in Super 8. I had a sense that what we had on our hands here was a uber-talented young actress with a future in Hollywood, and hopefully not a Linsay Lohan train-wreck (poor Linsay...how so I did love Mean Girls).

In her latest acting effort, the talented teen plays a distraught girl living an immensely complicated life under the looming and very possible threat of a 1960's nuclear holocaust. It's another shining and powerful performance from Elle, and you have one last chance to see her in Ginger & Rosa, tonight at 7:00pm at the Mayfair. Plus...Christina Hendricks plays her mum.

Posted by batturtle at 8:47 AM