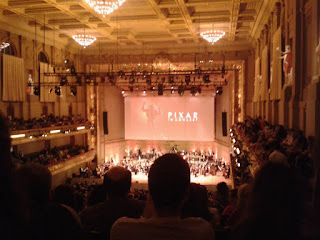 It's no wonder that people love the city of Boston. Sure, the subway cars give out an ear piercing screeching wail and sound like they are about to derail at any second, but otherwise it's a great place. We hit daylight from the subway tunnels to be surrounded by wonderful architecture, kind residents asking if we needed directions, and food trucks offering up all kinds of vegan delicacies.

Th big event today was attending the Boston Symphony Orchestra, and I'm pretty sure that there is no nicer place to partake in being an audience member listening to live music. The place has a great mix of commoner's and the super rich, all melded together with Bostonian pride. All you have to do is flip through the evening's program to see how many million dollar plus donations were made to the theatre to get an idea of the bank account heights of many of the patrons in attendance. There were a lot of the rich elite, but also families and students and people getting to the event via the subway.

The theatre had an interesting vibe of classical artistry and the high-brow community, yet was laid back enough to have an audience that responds to a greeting from the conductor, has servers delivering drinks, and a candy bar. The ushers all war American flag bow-ties,and it's clear that they are experts in and proud of their profession. And a lil' touch that I really liked is that every one in the audience dressed up for the occasion, a lil' bit of formalism that I find people have given up on now-a-days when they attend the orchestra.

Tonight's program was a collection of Pixar scores with big screen movie-clip accompaniment. I will leave alone my disappointment and dislike of the two Cars movies, and focus on the rest of their amazing library of animated motion pictures. I love Pixar's output, from Toy Story all the way through Brave (...except for Cars, but I just pretend those don't count). The scores for the films are just as impressive as the scripts, animation or actor's performances are throughout. I think putting on these kind of pop-culture crossover nights are great ways to trick people to attend a live event, and best case scenario leads to interest in checking out various other offerings from a symphony. If you don't get choked up on a night like this while listening to / watching excerpts from Up or Wall E, you are a cold heartless automaton indeed.
Posted by batturtle at 11:43 PM