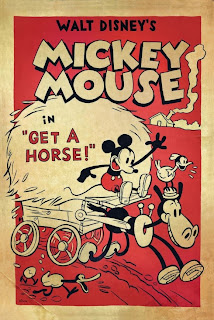 Went to see a bizarre animated pseudo biography about Monty Python alum Graham Chapman called A Liar's Autobiography. It had interesting intentions and some cool stories within it, it just didn't gel together for me.

Managed to see a real gem at the Ottawa International Animation Festival yesterday though. Was in attendance for a screening of the new Disney short 'Get a Horse'. The gimmick of the animation is that it goes from old-timey black & white hand-drawn animation, to modern day 3-D c computer animation. In a Purple Rose of Cairo / Last Action Hero like turn, Mickey and his pals go back and fourth between the different styles. The cartoon was filled with all kinds of retro characters who haven't appeared for generations. Including a guy called Jazz Cat who I thought was extra awesome looking.

As a bonus, the director was on hand to power-point presentation us through the behind the scenes aspects of the film. As an extra bonus, animator Eric Goldberg was there to show us how to draw Mickey (he designed the Genie!). And they gave us all super limited edition prints of the short. You can see it for yourself when Disney tags it in front their new movie Frozen, later in the year.