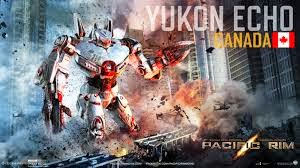 Watched Pacific Rim in all of it's giant anime style robots punching Godzilla caliber monsters last night at the Mayfair Theatre. It was exactly what I hoped it would be, I was immensely impressed. I think that this is the movie that Steven Spielberg wishes Michael Bay had the talent to produce. Sure, Transformers made all the monies, but just imagine if it had actually been good too? If there had been a camera on me, I would have been recorded in wide eyed geeky wonder throughout much of the movie.

Pacific Rim screens one more time at the Mayfair, tonight at 9:00pm
Posted by batturtle at 9:03 AM