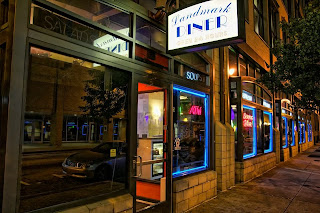 After a day of work, we explored Atlanta for a bit. The work, by the way, is setting up some big trade show booths at a glass convention. I'm riding my girlfriends coat-tails, picking up some work with the company that she works for, and getting to go and explore a city I've never been to on their dime. Conventions like this are fascinating to me. That just like comic books or cars or medical conventions, that something like this can attract glass nerds from all over the world. In fact, I have unconfirmed reports that this convention centre space is just as bi as the one as where they hold the San Diego Comic Con.

The downtown core of Atlanta is filled with some nice architecture, a big ferris-wheel, the CNN building (I find myself angrily spouting off about the state of teevee journalism every time I walk by), lots of statues, and a whole bunch of very friendly hobos. People always ask if it's difficult to travel and be a vegan, I've never had an issue. We stumbled upon a 24 hour eatery called the Landmark Diner. It looked like a traditional American greasy spoon, except they had delicious vegan onion rings and burgers! Even got to over-hear a could of locals talking about Disco Fries. That's what they call Poutine in this bizarre alternate universe.
Posted by batturtle at 11:03 PM