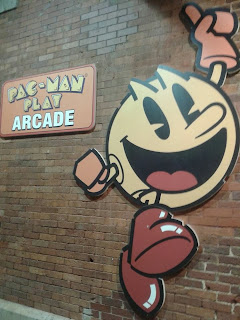 There is a magical underground mall in downtown Atlanta. Instead of tearing down and plowing over the old part of the city, they just built another layer on top of it. So, what was once an outside street with sidewalks and alleys and stores, is now a boxed in basement shopping district. Makes for a bit of a bizarre experience, walking through surroundings that were once exterior that are now interior.

In one of those former alleys is now the Pac Man Play Arcade. Unlike yesterday's arcade experience, this one did a much better job of passing the arcade test of greatness. They had not one, but two machines featuring the greatest arcade game of all time...Galaga. Good news, I reached the eye-of-the-tiger, jedi master like accomplishment of 280,000 some-odd points. I saw lil' alien creatures and a speed that I had never come close to at any previous playing. Bad news, my girlfriend was also off somewhere else in the arcade,so I have no photographic evidence of my triumph. That score, though it was twice the size of any previous score I'd achieved, wasn't even close to being good enough for the top 10. Much like that time I saw a UFO, you're just going to have to take my word for it.
Posted by batturtle at 11:40 PM