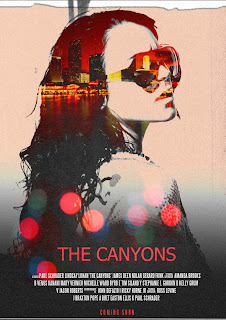 I'm back on Canadian soil which means my mind is back to normal and I'm back to talking about what's on at the Mayfair. We are currently in the midst of screening The Canyons. The Canyons is not a good movie, but it a fascinating train-wreck of a movie. I don't think I've ever seen a movie with a couple of big names behind it that is so top to bottom horrible. You would think that the creators of Taxi Driver, Raging Bull and American Psycho would at least be able to cobble something at least sub-par together.

Every level of this movie just doesn't work. The extras stand out as being extras, the sound is bad, the music doesn't fit, and there's cut-away's to abandoned movie theatres that don't attach to the story at all. Now, having said all that, if you are a film geek, you are going to be fascinated by this thing. It should be screened to film students as what not to do. We may just have another The Room on our hands here.

It's horrible, but mesmerizing, and I think you should see it. It makes for endless conversation points afterward. The Canyons screens tonight at 9:30pm and tomorrow (Tuesday September 17th) at 9:15pm. Poor,poor Lindsay.

Posted by batturtle at 9:29 AM