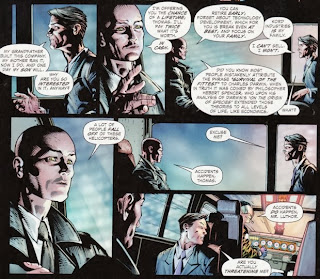 In the recently released Forever Evil #1 from DC Comics, Lex Luthor is seen in conversation with Thomas Kord. In the previous DC Universe, Thomas Kord is the father of Ted Kord. Being a new universe, plot-points don't necessarily have to match up, but Ted Kord is of course the second incarnation of Blue Beetle. Blue Beetle is one of my favourite characters of all time, so I'm hoping that this hints at a return of the the character who died a few years before the reboot and hasn't been refereed to yet in the DCnU. The third incarnation of Blue Beetle is already out and about battling evil in space, so it'd be a bit weird to have Ted Kord show up now...but I don't care. I just want more Blue Beetle. Then thy can get around to bringing in Plastic Man and I'll be really geek happy.
Posted by batturtle at 5:50 PM