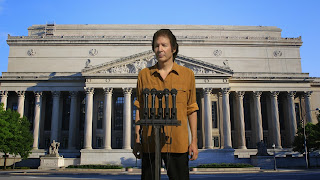 The new cult movie phenomenon that is Fateful Findings soon makes it's grand return to the Mayfair. I have seen Fateful Findings, I can't exactly tell you what happened in Fateful Findings though. Not because I want to refrain from spoiler-ing anything for you, but because I have no idea what the hell was going on in this movie. I can piece together some rough brush-strokes of a plot, but it's so bizarre I don't know how or why they are all mashed up together into one script and movie. There are supernatural aspects, there's some weird romance stuff, there's a big conspiracy theory, and there's a rather gruesome ending that I think qualifies as a twist. Not sure. There's also a lot of shots of shoes, a guy typing on laptop's that aren't turned on, and some ghosts...I think.

Fateful Findings is the new contender that gives The Room a challenging run at the title of worst film. For all of its faults, it's a hell of a lot of fun to see with a crowd, despite of its terrible over-all nature. Which, of course, you can partake in on Friday May 9th at 11:30pm at the Mayfair Theatre.
Posted by batturtle at 9:35 PM