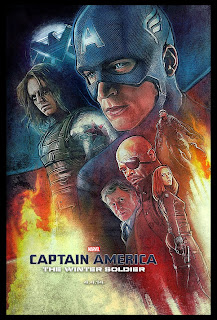 I hate going to the multiplex. I know that hate is a strong word, but every time I break down and go to one, I have a sub-par movie going experience. Tonight's experience was sadly no different than the multiplex norm of poor presentation.

No staff member closed the door into the theatre, leaving a glow of light on the lower left hand side of the screen for the first portion of the film. I could hear employees talking outside in the hall. The walls are thin enough that I could hear Godzilla wreaking havoc in the theatre next door. And, despite listings on their site making no reference to this, our movie was only in 3D. My friends and I all hate 3D. I could go on. Luckily, I used free reward points off my credit card to see the movie,or I would have been really upset.

Here's the good news, Captain America: The Winter Soldier was so spectacular, that it made up for all my cinematic experience whining and complaints. Marvel has turned the super-hero genre upside down by successfully presenting a movie starring a guy in a goofy patriotic costume that is as good as any political military espionage thriller the like of The Manchurian Candidate or Hunt For Red October with double the action of a Bourne movie (without the shakey camera). The actors excel, the twists and turns kept me surprised, plus it has Robert Redford and a guy in a cool jet-pack with giant metallic wings. And Scarlett Johansson...I think her Black Widow might just be the best female action hero since Ripley.

On top of it's awesome and entertaining filmmaking achievements, the movie is also filled with a truck load of fun easter eggs, character name drops and inside geeky references that will make any loyal comic geek sit up and take notice. As it stands now, Captain America III is going head-to-head against Batman / Superman in 2016. I think Warner Bros might want to reconsider this strategy and concede a loss and move back its release date. 'Cause I'm a giant DC Comics fan, but my movie going heart belongs to Marvel.

Thank you Cap, for rescuing what otherwise would have been another underwhelming night at the multiplex.
Posted by batturtle at 11:40 PM