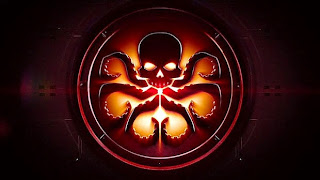 A lot of teevee shows needs a few episodes before the writers and actors and everyone find their feet and things settle into some good storytelling. Being a geek related show, it not so surprising that a certain brand of geek attacked the show with negative critiques as soon as its first episode aired. I have a more laid back approach to my entertainment intake...if I don't like a teevee show, I'll stop watching it.

Although I didn't think that the early episodes of SHIELD ranked amongst the greatest television of all time, it also didn't fill me with furious anger. I trusted in Joss and his gang, and I had a feeling that the show was marching towards something big. It was indeed. The last half dozen of so episodes of season one marched along at a ferocious pace. There were a couple of dramatic twists or comic book source material reveals that overwhelmed me with comic book aficionado joy.

Even though watching SHIELD played spoiler towards certain aspects of Captain America: The Winter Soldier (which I have yet to see), I was happy to see certain Marvel Cinematic Universe dramatic reveals happen via my SHIELD watching. In one season alone they've introduced a whole bunch of Marvel Comics characters who were unseen in the live action realm up to this point, have had big screen character guests, and geek royalty Patton Oswalt even shows up as a SHIELD agent. They even referenced Alpha Flight!

In my wildest childhood comic book geek dreams, I would never have imagined that not only a SHIELD ongoing teevee series were possible, but that it would also interact with a whole bunch of epic big screen Marvel adventures. When I was a kid, the best we had was stuff like a Hulk / Daredevil teevee movie and Superman IV. What we have now is much, much better. I look forward to SHIELD season 2.
Posted by batturtle at 1:49 PM