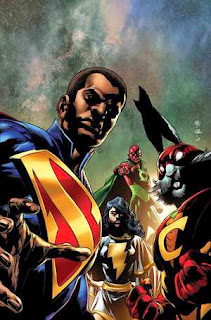 The highly anticipated, much delayed, Grant Morrison written DC epic Multiversity finally has a release date of August 20th. I didn't think I could have a higher level of impatient anticipation for this book to finally see the light of day, until this cover for the first issue. Amongst alternate universe versions of Superman, Captain Marvel and Green Lantern, there stands none other than Captain Carrot! Leave it to the brilliant madness of Grant Morrison to include an obscure funny animals super hero from the early 1980's into the mix. The complete 20 issues of Captain Carrot and his Amazing Zoo Crew, and the Oz Wonderland War 3 issue mini-series that followed are some of my most favourite comics of my youth. I look forward to reading what my favourite writer has in store for these characters in their modern day reimagining.