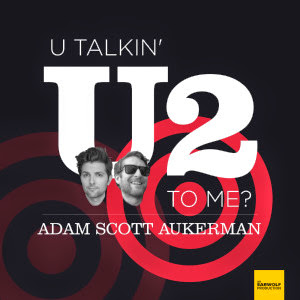 The praise of "funniest ever" gets thrown around whenever one sees a new teevee show or movie or stand-up comic that is exceptionally funny. I am fairly confident though, that U Talkin' U2 To Me is the funniest podcast that I've ever listened to.

The show is hosted by Comedy Bang Bang creator Scott Aukerman and Parks and Recreation actor Adam Scott. On the surface, it is a podcast featuring a couple of U2 super fans, in which they are supposed to talk about everything U2. The twist is, that despite all best intentions, they constantly go off the rails and lose train of thought and end up talking about everything but U2. They end up talking about movies, other bands,or delving into improv fueled comedic distraction. This would not be the end of the world, if not for over-obsessive types who have too much time on their hands, and really love U2. I never get why people keep partaking in something that they don't like. They do actually talk a lot about their love of U2...they are just a couplof funny guys who talk a bout a lot of other stuff too.

My favourite part of every show is my imagining of a U2 super fan stewing over and getting infuriated by the hosts as they talk about Huey Lewis & the News while still staking claim at being the be all and end all comprehensive U2 corner-stone on the internet. It gets even better when they read e-mails from those not in on the joke, and e-mails from those smart enough to play along with the gag. Initially they were supposed to do one episode for each U2 album, ending with a wrap-up episode about the latest album release. They've had whole episodes where they go pretty much U2-less, and the anticipated new release from the band has been delayed again and again. I hope the album never comes out so that this podcast can go on forever, and that it can continue to annoy U2 fans with no sense of humour.
Posted by batturtle at 2:41 PM