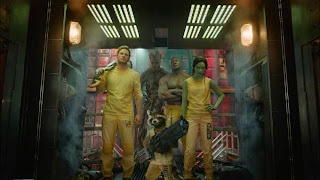 It is weird that due to a wacky chain of bad business decision events in the 1990's, Marvel does not own the bulk of their household name comic character franchises for film production. Marvel sold off the rights to Fantastic Four, X-Men and Spider-man, years before any thought that they'd be in a position to produce their own films one day. Meaning that now since we've made our way through the corner-stone Avengers roster, we're moving on to obscurity.

That Marvel is making use of their third tier characters now is not something that I look at with negativity. In my wildest grade-school lil comic book nerd dreams, I never thought there would be a live action Avengers movie. So, it never even crossed my mind that we'd one day have a movie starring Rocket Raccoon! Rocket is maybe my favourite character that most human beings have never hard of would be gracing the silver screen. Rocket Raccoon is making it to movie adaptation before Wonder Woman! I love this risk that Marvel is taking. I hope the gamble to give off-centre characters the spotlight pays off and we get more weird Marvel movies in the future (Micronauts...Cloak & Dagger...Alpha Flight). This is truly the golden age of geekness.
Posted by batturtle at 10:35 AM