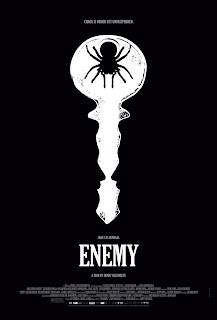 After watching various forms of of Asian cinema, specifically Japanese anime, I have often pondered how crazy almost all those movies are. I have joked before that they seem like such a nice people, but the cinematic output thy offer up can often be mindbendingly bizarre. That might seem like a cliche or stereotype, but I'v watched a lot of Japanese cartoons, and even the most mainstream of them are pretty out there.

To be fair, I imagine that film fans from around the globe probably think the same about much of our Canadian cinema. I mean, we gave the great David Cronenberg to the world, and I think even he would agree that his movies are kindah weird. This thought came to mind tonight after having watched Denis Villenueve's latest directorial effort, Enemy. As the credits finished up, my girlfriend, two of our best Mayfair patrons, and our projectionist, were all on the same page in a state of wonder and confusion. None of us were looking at it negatively, at the same time I don't think that any of us knew what exactly just happened. Not that that is a bad thing. A movie in which you don't know what's happening can make a whole bunch of interesting conversation and pondering in its aftermath. Jake Gyllenhaal delivers an impressive double duty twin performance, the mystery of the script kept me very Twilight Zone intrigued, and Toronto has never looked more horrible.

See if you are smarter then me and if you can figure out what wasgoing on in this movie, as we screen Enemy once more tonight, Thursday April 17 at 9:30pm.