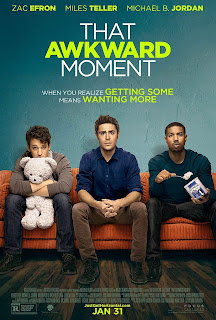 Went to the free preview screening of That Awkward Moment. It's kind of a male version of a NYC Sex & the City wacky misadventures of dating romantic comedy. The movie stars Michael B Jordan and Miles Teller (two potential members of the upcoming Fantastic Four reboot), and Zac Efron in another example of a role in which he desperately attempts to distance himself from High School Musical teenage heart-throb-ness.

It might seem like a crass cinematic point to complain about, but I find it so bizarre that an R rated movie filled with all kinds of sex, crudeness, dark comedy and low brow humour isn't allowed to have any nudity. There are even a number of rather in your face graphic sex scenes, in which there's a noticeable amount of carefully placed sheets or strange amount of clothing. Gone are the days of Porky's or even American Pie I guess. Gory torture filled horror movies or Superman killing thousands in a battle with his nemesis are ok by Hollywood censor standards...just everyone be sure to keep your clothes on