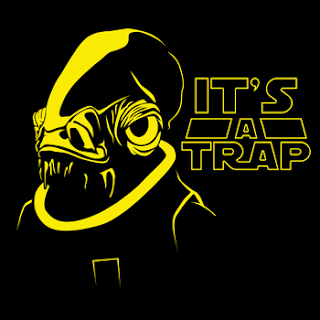 Kicked off the New Year with a matinee shift guarding the Mayfair, followed by a New Years Day dinner. Spent an enjoyable non-thrilling New Years Eve at home watching movies - the almost unbelievably violent and patriotic Die Hard wannabe 'Olympus Has Fallen', and a pair of politically incorrect baseball kids 'Bad News Bears' films: 'Basic Training' and 'Goes to Japan'. Even though things never got more action packed then eating lots of great food and not so great movies, was still feeling the Holiday exhaustion.

Went for a family New Year's day Chinese food dinner. Got a few post-Christmas belated gifts, including an Ackbar 'It's a Trap!' shirt. I remember the cover of an angry sci-fi geek movie with the slanderous proclamation of '50 Reasons Why Return of the Jedi Sucks!'. This is ridiculous of course, 'Return of the Jedi' has Jabba's Palace, Lando flying the Falcon, Ewoks terrorizing Storm Troopers, and way more then 47 more reasons why that movie is awesome. Top of that list might just be the second Death Star battle, with maybe my favourite piece of John Williams, and Admiral Ackbar is his space-chair yelling "It's a Trap!".
Posted by batturtle at 10:54 PM