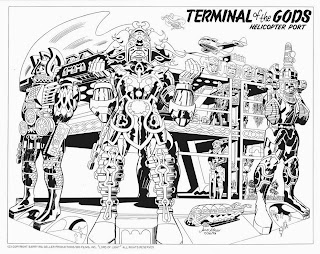 Sure, Ben Affleck's Argo won a bunch of awards, got a lot of praise, and made a lot of money. Like any "based on a true story" movie though, there is often more "based on" than specific truth. I enjoyed the movie, but it's not to unbelievable to guess that the tale was greatly Hollywood-ized in its adaptation to the big screen. I bare a movie no ill will for this. Anyone who is looking for absolute truthiness in their motion picture entertainment doesn't quite understand what movie entertainment is for I think.

One of the big omissions from Argo was that none other than the greatest comic book artist of all time assisted in this elaborate rescue scheme. Jack Kirby provided a bunch of the production design art used in the fake production package used in the endeavor, and that fact was sadly omitted from the story.

Luckily, the new documentary Our Man in Tehran corrects that omission, as Jack's art is briefly seen up on the big screen. You can learn all about Canada's heroic involvement in the 1979 Iran hostage crisis, AND see some Jack Kirby art tonight through Thursday January 30th at 7:00pm at the Mayfair.
Posted by batturtle at 9:54 AM