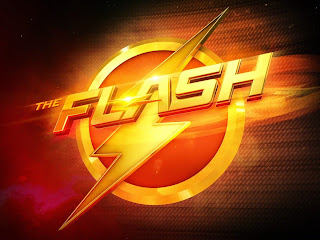 Watched the premiere episode of The Flash, the latest teevee series inspired by the wonderful world of comic books. I enjoyed it very much, especially the loyal retelling of the origin of the character, and the geek-tastic plot tease sting at the end of the episode (that I won't go into here in case you haven't seen it and wish to avoid spoilers).

I think there may be more comic book shows on then the number of Westerns on air during the cowboy heyday of Bonanza and Gunsmoke. At the moment we have Walking Dead, (Green) Arrow, Gotham, Constantine, and Agents of SHIELD. There's also Walking Dead and SHIELD spin-off's on the horizon, Daredevil and a batch of Marvel inspired shows headed to Netflix, iZombie, Preacher, and Powers are coming soon, and possible future series the like of Supergirl and Hourman.

To think that once upon a time in my youth, the most we could hope for in comic book related television were rather sub-par Incredible Hulk teevee movies or the super-hero themed (though not based on a comic book) The Greatest American Hero. I actually once looked forward to something called The Trial OF The Incredible Hulk, the same way I now look forward to another Guardians Of The Galaxy movie. We are spoiled in geeky riches, and the bubble seems nowhere near bursting.
Posted by batturtle at 10:37 AM