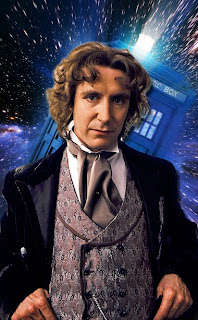 Watched the 1996 Doctor Who teevee movie starring Paul McGann, which served as an ill-fated pilot episode to a series for American television that was never meant to be. The real flaw with the story (and something that I'm sure must have infuriated Who fans of the time) is a truly lazy and sub-par effort at getting rid of the previous incarnation of the Doctor. Instead of some form of universe saving heroics, he falls victim to a random drive-by shooting and inept medical proceedings. Once that's out of the way, I think Paul McGann made a fine Doctor, and even Eric Roberts was an enjoyably over-the-top, almost Batman '66 calibre villain. It's amazing that a 90 minute teevee movie was the only real live-action Doctor offering in such a long time (between 1989 and 2005), considering what a powerhouse it has become since its return over the past ten years.

Paul McGann made a surprise brief return to Doctor Who-ness as part of the 50th anniversary celebrations. I'd be glad to see him return for more adventures. He looked to still very much fit the part in the mini-episode. It seems like there would be room for tales of a previous Doctor amidst his endless time travel adventures, and he would be most likely to fit the bill (and not aged too far from the role) to undertake such a project.
Posted by batturtle at 11:35 AM