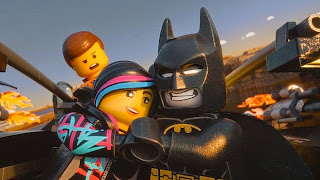 There's this great lil' community event every summer in Ottawa called the Centretown Movies Outdoor Film Festival that makes even I venture away from the glories of the Mayfair (though I went to the Mayfair earlier in the day to see The Immigrant, and am watching the other stuff we screened tonight later in the week). My girlfriend and our dog had a lovely evening under the stars in a park in central Ottawa and watched The Lego Movie. In a world of kids entertainment the like of Cars 2, Rio 2, Smurfs 2, and others of the like, The Lego Movie smashes all preconceived notions that it would just be a blatant commercial. Instead, thanks to a great creative team behind it, it inexplicably is instead maybe the most important life lesson of a movie that a kid could ever see. It sounds sappy, but the greatest compliment I can throw in The Lego Movie is that the world is a better place for its existence. Plus, it stars one of my most favourite Batman incarnations of all time. When The Lego Movie doesn't win the Best Picture award from the Oscars in 2015, it will be hard proof that awards for movies don't mean anything.
Posted by batturtle at 11:57 PM