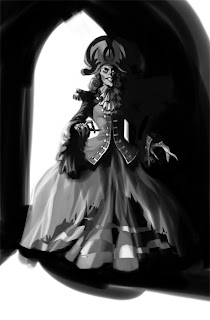 When you have a friend doing a Kickstarter campaign, you become incredibly invested in wanting to see the fundraising reach its goal. As I type this, my friend Kelly's hope of raising enough money to publish a book collecting his Strangebeard online comics is a success. With nine hours to go, he is at $7765, a mere $235 away from his bonus stretch goal reward level of $8000. I would very much like to see that happen. A whole bunch. You can be rewarded a digital or print version of this great comic, or get a hold of some awesome original art. So, please consider chipping in and click on over to the Strangebeard Kickstarter.
Posted by batturtle at 9:36 AM