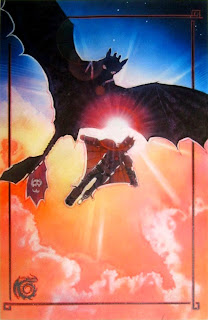 I caught the free preview screening of How To Train Your Dragon 2 last weekend. It was great on every level. Dreamworks has had a great financial track record with Shrek, Madagascar, and Kung-Fu Panda, but I think these Dragon movies put all previous efforts to shame. I find that Dreamworks cartoons have overt levels of slapstick and topical references in hindrance to the actual story. In the future kids will watch Shrek and have no idea what to make of Matrix or American Idol references, whereas the Dragon films are timeless. Every department on the film, from animation to cinematography to story, excels and helps push along the movie into being what will without question end up being one of the best films of 2014.

At the tail end of the credits, criminally underused in modern times poster artist Drew Struzan got a special thanks. It caught my eye and I was curious what his involvement was. I asked that interwebs and found this beautiful poster. Another example of foolish Hollywood passing on a beautiful movie poster in trade for character head-shot simplicity. The director is at least going to be giving out copies of the poster in San Diego at Comic-Con. Still frustrating that it won't see light of day in poster boxes at movie theatres though. If anyone is at San Diego this summer, plase do feel free to pick one up for me.