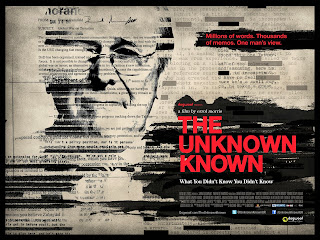 In the Donald Rumsfeld political documentary The Unknown Known, Oscar winning filmmaker does the nigh impossible for the movies subject matter. In a true testament to documentarian neutrality, he takes a person who is vilified by many, and showcases him as a human being. Don't take that to man that this is a fluff piece, it tells all the questionable acts and Washington trickery that Rumsfeld partook in. It also shows him getting choked up at the thought of an injured soldier,and telling cute self deprecating stories about his marriage.

Much like a comic book villain the like of Lex Luthor, a person who is perceived as a villain rarely sees themselves as one. I think that is the case here. Blinded with his mission and his agenda, he can't see through the forest of the trees of the problems that he helped to instigate.

The Unknown Known is a fascinating and informative documentary, we have it at the Mayfair tonight at 9:00pm (Saturday June 21), and Monday and Tuesday the 23rd and 24th at 4:15pm.
Posted by batturtle at 12:04 PM