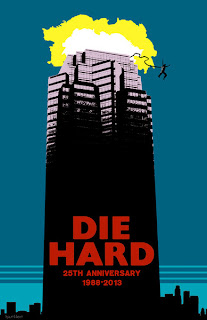 With no hipster irony or kitsch factor praise, Die Hard is genuinely my favourite Christmas movie. I can watch that annually the way a more traditional cinema aficionado might take in It's a Wonderful Life or Miracle on 34th Street. It's the action movie that all other action movies that came after wish that they could be, and Bruce Willis brings to life the most iconic and copies action hero of the modern film era.

Die Hard 2 ain't half bad either. I would say that it's the best action sequel ever made. It's also set at Christmas-time again too, which makes it the best holiday season double-bill of all time. (Geek Trivia - The movie is not in fact called Die Hard 2: Die Harder. The Die Harder tag was used on posters and in print ad's, but doesn't appear on screen in the actual movie as a subtitle).

Die Hard at 7:00pm and Die Hard 2 at 9:30pm on Monday December 23rd at the Mayfair! Yippee-ki-yay Merry Christmas!

Posted by batturtle at 9:32 AM