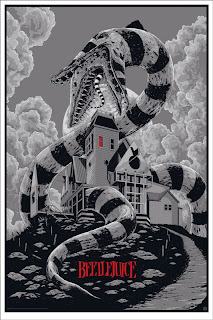 Hollywood seems to be in an age of simplicity in regards to movie titles. Maybe they did a focus group and came to the conclusion that people in the 18 - 35 year old demographic don't like syllables or something. The seventh big-screen Muppets film was simply called The Muppets, and the second Wolverine solo theatrical effort went with The Wolverine. The Fast and The Furious franchise went with Fast and Furious, Fast Five and Furious Six for the last three installments in the now seemingly immortal series. Animated fare seems to be sticking with unimaginative sequel branding of just slapping a number after the original title: Cloudy with a Chance of Meatballs 2, Despicable Me 2, How to Train Your Dragon 2.

The Beetlejuice 2 production rumors have seemingly almost become a fact. The script is being worked on, Michael Keaton has confirmed involvement, and supposedly Tim Burton is in negotiations with Warner Bros to return to direct. Michael Keaton is one of my favourite actors, and I would be very happy to see him return to portray the host with the most for another turn.

Here's my idea for what the movie should be called, inspired by the aforementioned simple titling trend. Although the original film was called Beetlejuice, the spelling of the characters name was actually Betelgeuse. Instead of just slapping a 2 on the end or inserting a 'The' at the beginning, go with calling it Betelgeuse. It keeps the name brand, it's weird enough to garner some attention, and it keeps things down to three syllables. We all know that to summon the bio-exorcist you only have to say his name three times. So, if part two goes well and the powers that be want to do a third, that one can be called Beetlejuice, Beetlejuice, Beetlejuice.

You are welcome Warner Bros big shots.
Posted by batturtle at 6:48 PM