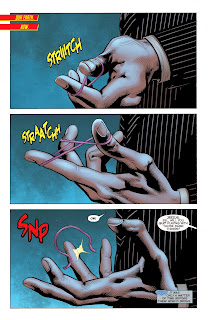 Justice League #25 continues to tell the tale of the latest crisis to befall the super-hero's and residents of DC Comics New 52 Universe. A team of evil alternate universe versions of the Justice League have invaded the planet quite successfully and are on the verge of world domination.

In this issue writer Geoff Johns and artist Doug Mahnke tell the very different mirror secret origins of what happened around the deaths and the aftermath of Bruce Wayne's parents. The beginnings of Owl Man (evil Batman) are revealed, and we then leap into his present day exploits.

One simple three panel page in the midst of the story made my geeky heart skip a beat. My comic geek radar was clearly at 110% Jedi like levels as I knew exactly what was about to happen, even though the panel was a the mere close-up of a hand of a guy in a pin-striped suit fidgeting with an elastic. In the second panel the mystery man plays with the elastic, and in the third it snaps and someone off panel calls him "Eel". I may have actually gasped or cheered at that point. If not out loud, I definitely did in my mind.

As we all know of course, Eel O'Brian is the small time hood who had a bad mishap with some hazardous goo and he went on to become the heroic jester Plastic Man. Plastic Man is finally in being put into the New 52! Now, this causes a giant continuity error conundrum, since way back in Justice League International we saw that Plas was passed over for membership. So, that means that the character was just created now, even though he was around a few years back. I don't care. I'll give you a pass on this one DC. I'll gladly pretend that that first appearance never happened as long as I get some new Plastic Man stories.
Posted by batturtle at 10:54 AM