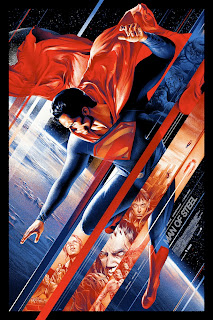 Watched Man of Steel at the Mayfair last night. Much like every single Superman movie that preceded it, I find it a very perplexing and difficult piece to give opinion on.

Even the Richard Donner directorial efforts that many a comic geek and cinema fan stick up on a pedestal, I find far from perfect. In fact I think 1978's Superman: The Movie is mayhaps the most split-decision opinion I have ever felt. I think the movie is filled with classic moments of adventure and wonder, some great performance, and one of the best score's ever to accompany a motion picture. It also is hindered by some horribly cheesy clunky moments (like Lois' poetry) and what I decree as the worst ending to a good movie ever made. Even as a kid I thought that having your hero spin the world backward to make time reverse was bad script-writing and scientifically improbable, even in a world with a guy from another planet who can fly and has god like strength. At the same time, I think that Christopher Reeve's performance is one of the most impressive ever to grace the silver screen, and proves that the Clark / Superman thing could in fact work.

Superman's II through IV get worse as the number's get higher. Each does have it's moments though. Even the one with Richard Pryor and the one where Superman goes on a quest for peace have a few shining moments. Maybe after you pulled out giant portions of each film, they could be puzzle-pieced together into one really good four hour mega-movie. Then there's Superman Returns, which had the best of intentions but became a confusing bit of a mess. Was it a sequel...was it a re-make...I don't think anyone still knows quite what it was.

That leads us to the sixth Superman movie, a re-boot of the franchise that has gone all Dark Knight and is simply called Man of Steel. It comes from the team behind the Dark Knight trilogy, the director of other comic adaptations Watchmen and 300, and sets our Kryptonian hero in a more real world type of surroundings. And there-in may lay the big flaw in this whole pitch. I respect exploring a decades old character in a new light, I don't fear change in looking at an old character in a new way. If you look at that other mega-popular DC character Batman as an example, I enjoy numerous incarnations of the character. I like the Adam West 1960's version, the Michael Keaton 1980's / 90's version, different animated incarnations, and all kinds of different comic book alternate universe interpretations of the Batman. So, I don't mind a new take on Superman for this new millennium.

Realism and comic book fantasy is a tough line to mesh. I find it hard enough to accept a Superman with no red underwear, do we really want a Superman that has a collateral damage kill-count in the thousands in his climactic super villain battle? There was also a part where Pa Kent essentially told lil' Clark that he should have let a bus load of kids drown in order to protect his secret identity. That bit of dialog actually actually made me sit up in my seat for a second, not believing what I had just heard. I'm just not sure who they wanted their target audience to be in this movie. I can't imagine it being all that appealing to a kid, yet there are action figures and lunch box merchandising. I can't imagine a kid zooming about with an action figure of this version of Superman, imaginings about the joys of flying and fighting bad guys.

This movie is pretty good science fiction if you have never heard of Superman and have no attachment to the character. As a Superman movie though, I think I was left rather saddened and offended. Not the best reaction to what should have been a big fun summer blockbuster. And I'm not even that big of a Superman geek.