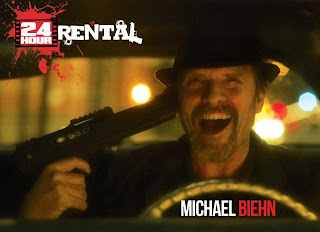 It seems like just yesterday I was a video store clerk and my friend Al Kratina was a young customer of side-kick level proportions. Cut to fifteen years later and I'm sleeping on his couch while I visit Toronto and he's on a panel for a teevee series that he wrote. Got to attend the panel tonight at Fan Expo, where he got to sit before a crowd and squirm under adulation from his director, actors, and those in the crowd. His show is called 24 Hour Rental, and is a dark crime genre comedy that takes place around a video store.

The best part of the night was that Al got to introduce myself and our friend Kelly to one of the actors from the show, Michael Biehn. Michael Biehn has of course appeared in Grindhouse, Tombstone, The Abyss, Terminator and Aliens. Aliens just happens to be Kelly's favourite movie of all time. I have high praise for it too, I even once had a cat named Ripley. So, we got to shake hands and managed to avoid embarrassment via geeky gushing fumbles of worship. I didn't break down and ask if it was cool that time when he killed Aliens or battled a Terminator. A rogue nerd interrupted us while we were meeting him as Michael was lauding compliments Al's way. I almost intercepted the geek with a whisper of "Now's not a good time...move along.". He was one of those geeks that gives geeks a bad name, but we all came out of the awkward interaction unscathed.

The clips looked great. I'm very much looking forward to seeing the final product. You can find information about 24 Hour Rental on Facebook and on Twitter under @24HourRental, it will premiere in Canada on Super Channel sometime before the end of 2013.
Posted by batturtle at 11:00 PM