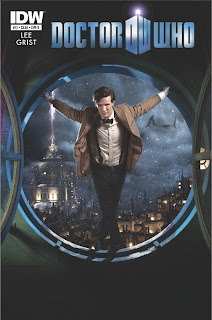 More and more I find myself getting bored with comic book super-heroes. I think a lot of that has to do with writers and artists leaving the mainstream in favour of doing their own creator owned work. Some of it might have to do with the fact that I've read a bazillion comic books featuring super-heroes, and maybe it's all starting to get a bit repetitious. The last big Marvel cross-over, Age of Ultron, was a train-wreck of uninteresting storytelling. Not only was it boring, but it pissed me off 'cause by the time it ended it just felt like a complete waste of my time. Nothing happened that deserved to be spread over multiple issues along with a whole bunch of crossovers. DC hasn't been doing much better, and my intake of reading of the New 52 has decreased rapidly.

Then I noticed that with my latest comic book delivery, from the last two weeks, not a single purchase from the big two publishers. Abe Sapien and Buffy the Vampire Slayer from Dark Horse, East of West, Satellite Sam, Savage Dragon and Saga from Image, Quantum & Woody from Valiant, and Doctor Who from IDW. A reminder to folks that even if you might be interested in reading comics and you've outgrown the super-hero mainstream, there are still plenty of comic book offerings for you to try out. There's less and less that I'm looking forward to at DC and Marvel (there's a Harley Quinn book on the horizon drawn by Amanda Conner at DC, and Hawkeye continues to be great at Marvel), and more and more from all the other publishers. And as a geeky footnote, the Doctor Who comic is just as good as the show. Very impressive.
Posted by batturtle at 4:52 PM