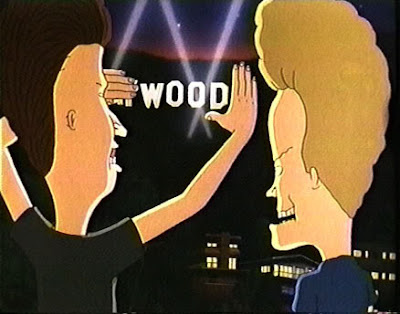 I remember the pop-culture boom that was Beavis and Butt-Head. At one point in 1993 - 94 or so, they were everywhere. They seemed to be on every magazine cover, t-shirt, and entertainment news clip. I did not like them. To be fair, at this point I hadn't actually seen the a single episode, I was purely judging the product before actually having seen it. We didn't get MTV in Canada at the time. Or if we did, it wasn't regular cable...and it was before that there internet contraption made watching every single thing ever made readily available for your viewing enjoyment.

In a fateful post-high school vacation to Florida, my two friends and I spent a large chunk of our get-away in my aunt and uncle's backyard pool. A backyard pool that just happened to have a TV nearby to it. So we got to be in the pool, eating amazing junky American food, while watching TV. They were good times indeed.

What people who never watched the show (like me) didn't know was that it was hands down smartest show on television. Really. Pure genius. Then I noticed that a lot of people who I thought were cool (David Letterman, Patrick Stewart) were also fans. It started getting more accolades and praise from legit media sources and not just those MTV slackers. Then a lot of people kind of realized that Mike Judge was a cartoon makin' genius. Or at least I think so.

Maybe the pinnacle of his animated genius is the one and only big screen adventure undertaken by the duo, Beavis and Butt-Head Do America. A grand adventure of two idiots on a quest to find their missing TV. There's an awesome dream sequence, nifty secret celebrity cameo's, a Rob Zombie hallucination segment, and an amazingly put together story (even more impressive 'cause it's a pair of characters who are usually in short episodes of which a big chunk is music video cut-aways).