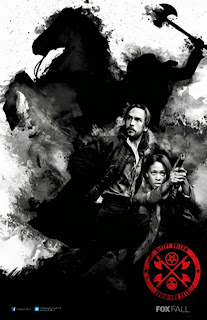 When I first heard about this new Sleepy Hollow teevee series on Fox, I didn't give it much thought. I am already back-logged with a ton of television programs to watch, and thought that it might be the caliber of something the like of Charmed. I wasn't paying attention, and did not realize that th show comes from the director of Underworld, and the writer / producer team who have worked on Xena, Jack of All Trades, Fringe, and the last two Star Trek movies. I like all of those things. And I'm totally hooked on this show now.

The latest incarnation seems silly on paper, Ichabod Crane wakes up in 2013 and helps a cop fight off monsters in an X-Files like manner. Actually, scratch that, that sounds awesome. I don't know what I wasn't on board with this from day one.
Posted by batturtle at 3:58 PM