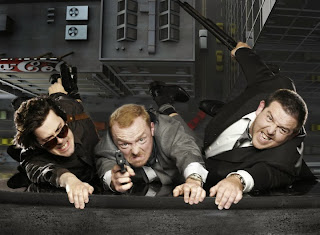 I don't think there is anything better then a movie directed by Edgar Wright, starring his friends Simon Pegg and Nick Frost. Simon and Nick are an incredibly talented duo, and Edgar Wright is on an impressive run of directing a great teevee series (Spaced) followed up by four great movies.

Tonight at the Mayfair we kick off the Halloween season in style with Shaun of the Dead , everyone's favourite zom rom com, at 7:00pm. If that's not enough bang for your buck, we're making things a double-bill with Hot Fuzz , the guys follow-up action-packed cop epic, at 9:00PM.

After watching the first two thirds of the Cornetto Trilogy, you'll be all good to go for The World's End, which hits the Mayfair on October 21, 23 and 24.

Posted by batturtle at 8:57 AM