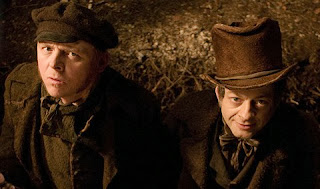 A rare lazy day of catching up on some teevee - Agents of SHIELD, New Girl, Bob's Burgers, and a binge of Parks & Recreation episodes. It for some reason totally wares me out taking in that much teevee in one day. Even though I didn't do anything, it felt like an accomplishment.

Hardly ever watch movies at home anymore, I watch everything at the Mayfair or the occasional multiplex visit for a free preview screening. On these days when I have a spare moment to do so, trying to catch up on non-theatrical movie watching too. Especially during the Halloween season, there are a ton of theme appropriate movies that even a movie geek of my stature hasn't gotten around to seeing just yet.

Tonight's Halloween themed offering was Burke and Hare, the latest telling of the 19th century Scottish murderous grave-robbers. It was a lot of morbid Hammer Films style fun. It stars a pair of greats in the title rolls, Simon Peg and Andy Serkis. It was finely directed by John Landis, who has directed such classics as The Blues Brothers and An American Werewolf in London. And yet, this movie couldn't find wide North American distribution, and hence very few people got to see it. We weren't even allowed to screen it at the Mayfair. It was going to be my birthday movie! It's a shame that that happens to these kind of well worth seeing movies. I blame Michael Bay.
Posted by batturtle at 11:21 PM