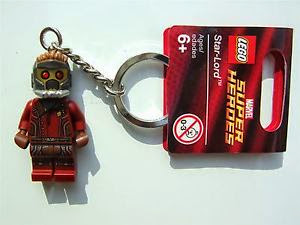 My girlfriend and I got up horribly early to go to the airport to trek to Vegas for a week and a half of work. Nothing too exciting, helping at setting up a giant glass themed trade show. The money is decent though, we get a nice per diem, and get a decent bit of time off in between the working to do Vegas-y things.

The heat was staggering. I've never felt heat like that before. I could barely make it over to the mall,only a few blocks away. We went to a great vegan friendly place called the Red Velvet Cafe for dinner. Visited the Lego Store, where I got a Star Lord key-chain. It's still a bit unbelievable that Star Lord is available in Lego form. Also stopped into the Disney Store. It's bizarre to see The Punisher and Deadpool on a t-shirt for sale there.

For a more Vegas touristing themed event, we went to the kid themed hotel casino Circus Circus for classic arcade video gaming and trapeze artist watching. My girlfriend is addicted to Skee Ball, and won roughly on bazillion game tickets. Which bought her a teddy bear and candy.