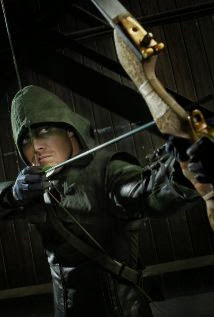 Finished up watching the first season of (Green) Arrow. I still cringe at the horrible levels of violence and murder that the vigilante undertakes on the show. Though, I continually get won over at how in each and every episode there's some geeky comic book reference or in joke, whether that be a hotel room number being 52, a pair of characters being insultingly called the Wonder Twins, or Ted Kord (Blue Beetle) having his name dropped. I just wish that the producers and writers would have leaned towards Ollie shooting people with boxing glove or tazer or net arrows, instead of having him rack up such an astronomical body count episode in and episode out. Every time he kills someone, I just think "Batman could've done that without killing anybody."
Posted by batturtle at 9:53 PM