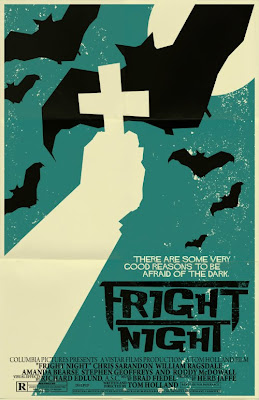 Tonight at 8:45 (Oct 4) at the Mayfair the Halloween programming continues to roll along, this time with a presentation of the original (and the best) version of Fright Night. I was never a giant fan of the juggernaut 80's horror sequel franchises the likes of Nightmare on Elm Street or Friday the 13th, I seemed to lean towards other areas of horror offerings, and Fright Night was one of my favorites.

Writer / director Tom Holland brought to the screen something a kin to the John Hughes teen angst formula, but instead of having our hero go up against an evil principal or various forms of high school crisis, this one goes up against a vampire. Holland went on to direct a couple of Stephen King stories, and a number of very good TV horror offerings within series like Tales from the Crypt and Amazing Stories, but I think his first directorial effort was his best.

The film stars William Ragsdale (who also seemed to have peaked in Fright Night) as the teen in trouble, with the much more memorable vampire and washed up horror TV host turned vampire hunter roles going to Chris Sarandon and the late great Roddy McDowall. The remake does boast a rather impressive cast (including the 10th and best Doctor Who, David Tennant) and a script from Buffy / Angel vet Marti Noxon, but in this case as in most (with rare exception of your True Grit's and Ocean 11's) you just can't best the original.
Posted by batturtle at 12:30 PM