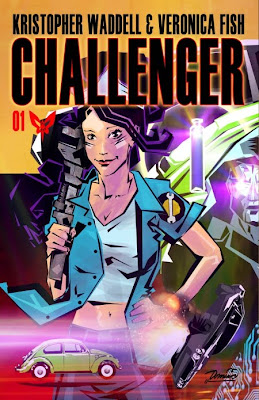 It's a pride filled time in a life-long comic book reading geeks life when they have a shiny new comic book out that they worked on for the masses to read. My friend and comic-con posse member Kris Waddell has a new mini-series out through Mirror Comics called Challenger. You can download it through mydigitalcomics for a mere 99 cents right now, and then sometime in the near future you can get a good old fashioned paper version. Go download it now! C'mon! It's only 99 cents! It'll slightly adjust the karma-wheel back in your favour to make up for all of the movies and music you've stolen off the interweb...and it's actually a really good comic too.
Posted by batturtle at 12:20 PM