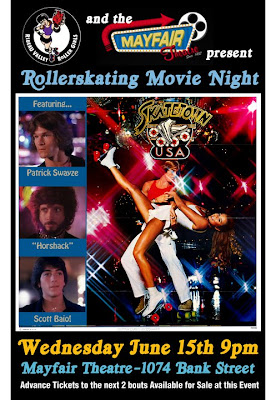 I don't think that there is anyone who would be terribly shocked that the director of such cinematic classics as Blackenstein and The Happy Hooker Goes to Washington did not achieve film-making perfection with his late seventies effort, Skatetown U.S.A.

Though, as with many a movie of this kind, the levels of awfulness it achieves does not detract from the level of enjoyment that an audience can take away from it. So bad it's good classifies a roller skating disco epic starring a Happy Days era Scott Baio and featuring the acting debut of Patrick Swayze, years before he partook in any form of Dirty Dancing.

If getting a chance to see the rock & roller disco movie of the year wasn't incentive enough to hit the Mayfair on Wednesday night instead of watching the final game of the Stanley Cup playoffs, the show is also presented by the Rideau Valley Roller Girls. And they will be on-hand to partake in the experience of roller-skating movie action, and sell you tickets to the next RVRG bout. Which you will want to buy, because attending a roller derby bout in person is high on the list of the most of enjoyable ways that you can spend a night.

Skatetown U.S.A. - Wednesday June 15th at 9:15pm - for one night only at the Mayfair Theatre. A much more fun night than jumping on a band-wagon and cheering for a hockey team that you hated or were at least disinterested in the rest of the year. Promise.
Posted by batturtle at 7:29 PM