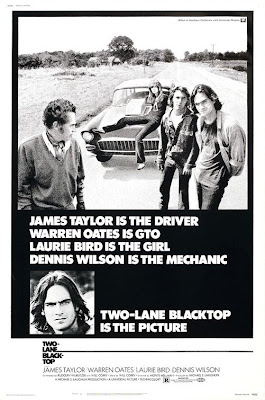 Ever since the big poster for the March schedule went up in the lobby at the Mayfair, I think the number one thing that I've heard over and over again is "That can't be THAT James Taylor." It is indeed that James Taylor starring in this 1970's drive-in classic about drag-racing across the States. The same James Taylor who has won six Grammy's and sang his own brand of laid-back adult contemporary music to Homer Simpson while he was in outer space.

On Monday March 7th, the acclaimed film kicks off a month of car themed movies at the Mayfair for Lost Marbles Geek Night (with a nifty car type prize from Lost Marbles which will be given away to one lucky attendee). The other diverse batch of automobile themed movies on there way are Stephen King's Maximum Overdrive, George Lucas' American Graffiti and Sam Raimi's Army of Darkness. The last film isn't a car film per-say...but it does have an awesome car in it, and any excuse to show the greatest film of all time is a good one.
Posted by batturtle at 5:55 PM