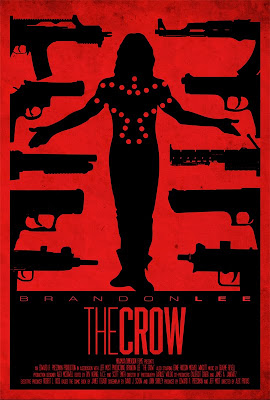 Of course The Crow is memorable as the haunting final performance of Brandon Lee. Who like his movie-star father before him, died in his prime with so much possibility laid out before him. Lined up as his big break-through role after a few B-grade action movies, many thought that Brandon was the next big thing. And if not for some very bad luck and a freak accident, he would likely have been.

The whole sad tale has an extra brooding and creepy tinge to it, thanks to the fact that the film is about a central character that comes back from the dead. And in a way, Brandon Lee came back from the dead amidst publicity and praise to perform his final role up on the silver screen.

On a lighter note, I will always remember The Crow as the first R rated movie I attended as an 18 year old. For which I so smartly forgot my ID, but luckily got into anyhow.

The Crow hits Lost Marbles Geek Night at the Mayfair - Sunday September 5th at 9pm
Posted by batturtle at 8:00 PM