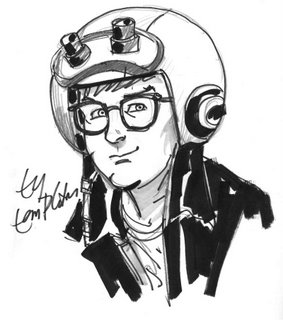 Another delayed update. This one on last weekend's Comic Book Expo in Toronto. Above you'll see a Commander Rick sketch by Ty Templeton. If you're not in the know, Commander Rick hosted a comic book / science fiction themed show called 'Prisoners of Gravity' that was on from '89-'94 on TVO (the public TV channel in Ontario on the off chance that anyone from far away is reading this). It was the best show. They interviewed everyone: Niel Gaiman, Alan Moore, Frank Miller, Sam Raimi, Jack Kirby (!) and many many more. Anyhow, Ty did the art for the opening of the show, so it was very kind of him to add a very nice sketch to my collection.
As fate would have it, I ended up being alongside a few other folks keeping Mark Askwith (PoG producer, interviewer and mastermind) away from his being set-up surprise birthday party. Which I got to tag along to. Met bunches of other cool people, including none other than (Commander) Rick Green himself.

So that night was the highlight hands down. Managed to add a few other sketches to the book. The couple below are from Yanick Paquette (who's currently in the midst of doing some Civil War stuff at Marvel) and Andrew Barr (check out his site at: www.somethingagogo.com ).
Got a lovely bizarre sketch of some kindah' unicorn monster from an artist who you should check out at www.yargot.com. And got in my annual visit with and comic book purchase from Tyrone McCarthy. Check out his comic book titled website at www.CorduroyHigh.com and buy many of his comics.
Went to see an evil movie about an alien invasion with the rather appropriate title of 'Evil Aliens'. Bought some Hellboy toys. Hung out at Brett Kelly's booth for a bit as he peddled his wares. They sold out of 'My Dead Girlfriend' DVD's. Always nice. By Sunday I was completely worn out. Didn't pace myself well enough. Need to remember to get in more sit down geeking (panels and movies) at the next con. I did bump into the actual Carrie Fisher, but alas, no geek-girl metal bikini Leia pictures this time. 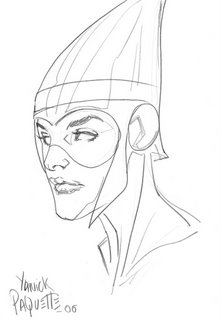 The Bulleteer sketch by Yanick Paquette 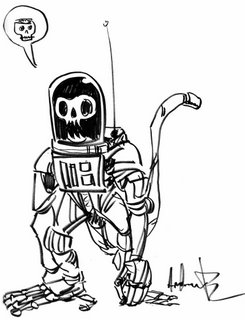 Undead Space Monkey sketch by Andrew Barr
Posted by batturtle at 12:28 AM

Well, you've certainly gotten me jealous over the Commander Rick sketch. I'm a big fan of the show and I wait for the day (though I'm not holding my breath) that someone can get the rights sorted out enough so it can be released on DVD. I figure I'll be waiting a looong time, but y'know.

Sooner or later we plan on interviewing Rick for the Comic Book Connection. If his schedule permits I hope to do so while he's in town with the Frantics on October 20th.

It's an in pre-production news magazine project focusing on comic books and related genres that we have in the works. There's a couple of logo designs up on the blog. We're doing host auditions soon. The blog shall keep folks posted as to when we actually have the thing up and running.

Well, that'll teach me not to go further through the blog, I suppose. Are you going for a similar thing to PoG, then? Perhaps not in terms of style (Commander Rick lost in orbit) but in terms of themes and structure? Or something else entirely?

Sorry! Being a nosy beggar!

Well, we don't intend on ripping off Mark and Rick and company entirely, but there will definatly be some influence there as I worshiped that show when it was on.
We're not going to have anything in the way of a science fictiony host element for the show (no one reporting from space). As it stands now we plan for a main central female host. She'll be doing some interviews and we'll do some just in talking head form for montage segments as well. We'll have more on air folks with the possibility of a regular 'new comics day guy', and correspondants in Montreal and Vancouver. Plus more current event kind of stuff in terms of movie, TV show, and video game reviews. And I hope to get some behind the scenes movie stuff for comic themed film productions.